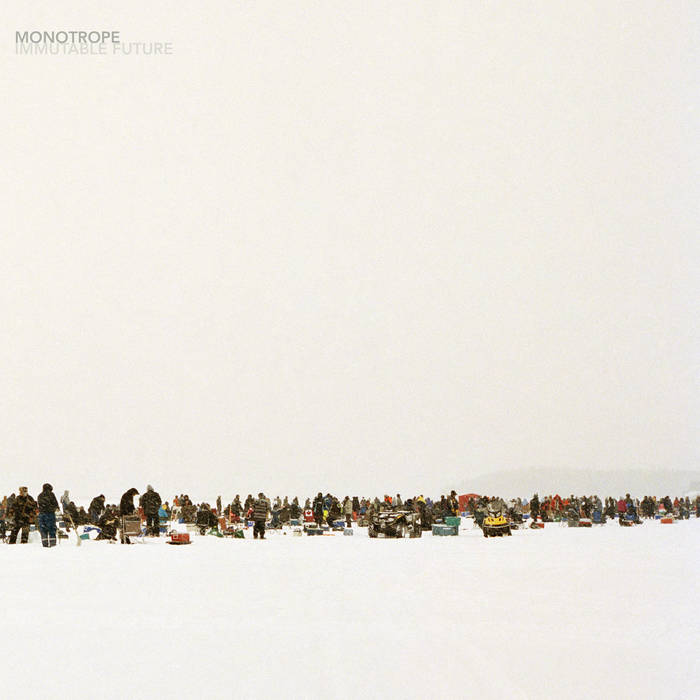 Monotrope makes instrumental rock music that is rich with contrast- a full-spectrum sound harnessing wide-range dynamics and compound meters, awash with rich saturation, lush consonance and angular dissonance. Immutable Future, their second full-length in as many years, carries the same sense of rapturous excitement and cathartic energy as their debut (Unifying Receiver; 2017, New Atlantis Records + Sleeping Giant Glossolalia). Whereas their debut revealed a band discovering the breadth of its own potential, Immutable Future is a confident step into the void of aural omnipotence, with the band crafting cathartic resolutions that clamor towards musical transcendence.

Rejecting stylistic confines, the Monotrope sound maximizes the impact of powerful, shifting dissonances and complex rhythms, by carefully weaving glimmers of radiant tonality into their work. The band works to realize their archetypal vision for expressive + innovative rock music with expansive, guitar-driven compositions, propelled by grinding bass guitar and limber, forceful drumming. The rhythm section is infinitely malleable, brashly navigating difficult passages with fluidity, while extrapolating outwards from the musical ideas central to each passage. The guitars themselves speak some fundamentally distinct dialect, strangely familiar yet expressly unique, calling to mind disparate voices like John Fahey, Gang of Four, Bastro and Erik Satie.

Monotrope members are dispersed far across the USA, representing California, Texas, Ohio, and Maryland. Guitarist Ed Ricart is known from bands such as Hyrrokkin, Unraze, and Matta Gawa, as well as collaborations with William Hooker, Merzbow, and many more. Bassist Matthew Taylor is a member of Bellini, and worked for years as the art director for Touch & Go Records, designing iconic album layouts for the label's revered roster of bands. Guitarist Dan Wilson played in the Pittsburgh rock band Hurl, while drummer Joe Barker has played in Oakland’s Unraze, Tigon, Color TV, Ventid, and many more.

Recorded with Jason LaFarge at Seizures Palace (Swans, Angels of Light, Khanate) in Gowanus, NY, the record was mixed with John McEntire at SOMA Studios (Yo La Tengo, Tortoise). The band took some facets of the production into their own hands, taking advantage of Ed Ricart’s own Ambition Sound studio to make space for further sonic experimentation, and recording some additional guitars in Dan Wilson's own project studio.

The record jacket and insert feature photography by Aaron Vincent Elkaim. The front cover shows a community gathering together for an annual celebratory ice fishing derby on the Althabasca River near Fort McKee, Canada, though the water and fish have been rendered toxic by runoff from the nearby Oilsands development. The insert is an aerial photo of an illegal logging road in the Rainforest near the Amazon in Brazil.

Immutable Future is available on November 21, 2019 as a co-release between New Atlantis Records and Ambition Sound.