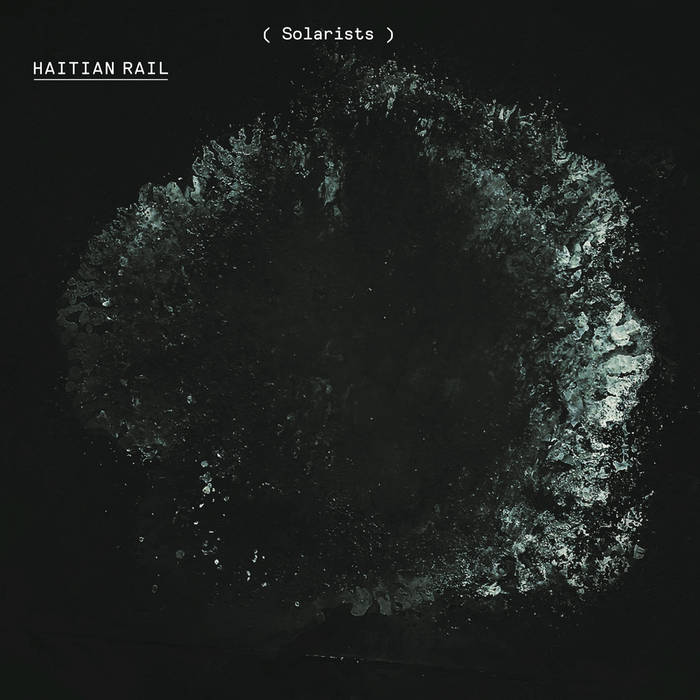 The pace is set at the outset with the thunderous, electrifying opening of 'Trembler.' The frontline dizzyingly navigates the serpentine head in unison before collectively arcing into raucous, high-octane energy music. An unaccompanied drum solo at the center of the piece deftly manages to sound skittish and menacing all at once. 'Overburden' is essentially through-composed, with a section of ominous trombone-driven improvisation, buttressed by serialist melodies. 'Flare Star,' at just under seventeen minutes, is the record's longest piece, boasting a minimalist introduction, and curvilineal head bookending an extended trombone/bass/drum trio romp, and a feedback-laden drum/guitar duo. 'Seven Wastes' is a fitting closer, with passing, chromatic drones soaring over pummeling, relentless percussion.

Edward Ricart
Edward Ricart is a guitarist and bassist presently located in Yellow Springs, OH. His creative outlets include avant-rock power trio Hyrrokkin; free jazz/noise rock quartet Haitian Rail; free-rock duo Matta Gawa; and the Edward Ricart Quartet, alongside Herb Robertson, Jason Ajemian, and Andrew Barker. He has also collaborated with William Hooker, Marshall Allen, Merzbow, Peter Broetzmann, Paul Dunmall, and members of the rock groups Tortoise, Black Flag, and Fugazi, among many others. A veteran of Washington DC's creative music underground, his weekly New Atlantis series of concerts earned him the designation of 'Avant Garde Savior' and Best in DC by the Washington City Paper. The series blossomed into a vanguard record label, with an exemplary roster of rising stars and established legends. His work incorporates the processes of new music- including serialism, through-composition, and free improvisation, braced with the dissonant, polyrhythmic backbone of creative rock music.

Nick Millevoi
Nick Millevoi is a Philadelphia-based guitarist who explores and expands upon the sound of the electric guitar through frequent use of non-traditional tunings, feedback, and raw noise. On his most recent solo-guitar releases, Numbers on the Side (Ivory Antler, 2014) and In White Sky (Flenser Records), Millevoi combines his 6- and 12-string electric guitars with drones and extreme volume to create a startling new work. Nick is a member of the noise-rock-free jazz trio Many Arms, whose second album for John Zorn's Tzadik label will be released in April 2014. Nick makes one half of the duo Archer Spade with trombonist Dan Blacksberg, who have performed music by composers Mick Barr, Gene Coleman, Dave Soldier, and Johnny DeBlase, as well as curating a performance series in Philadelphia. Nick has toured extensively as a solo guitarist as well as with Many Arms, Deveykus (Tzadik), Make A Rising, Electric Simcha, and with Gene Coleman's Ensemble N_JP, and has performed across the US, Canada, and Europe and at festivals, such as Incubate (Netherlands), Gaffer Fest (France), Suoni Per Il Popolo (Canada), Montreal Jewish Music Festival, and the New Atlantis Festival (DC), and the Masada Book Three Premiere concert at New York's Town Hall. Nick has collaborated with many great improvisors, including Toshimaru Nakamura, Keir Neuringer, Thomas Buckner, Ken Ueno, Ches Smith, Travis LaPlante, Weasel Walter, Kevin Shea, Joe Lally, Dead Neanderthals, Balazs Pandi, and many others. The Village Voice has called Nick a "guitar-wielding, audience-massacring hero," and music journal Burning Ambulance has described him as, "A fierce player who knows his way around a riff and can tie himself, and the listener, in knots with his contorted, passionate soloing." Foxy Digitalis called In White Sky, "a searing collection of exploded guitar compositions." Millevoi's music has been reviewed by SPIN, NPR Music, The Onion AV Club, Wire magazine, and many others.

Dan Blacksberg
Dan Blacksberg is rapidly emerging as a new leading voice on the trombone. With musical activity that spans avant-garde jazz, modern classical music, improvised music and klezmer, Dan brings a burly, rough-edged sound intended to push at the technical and textural extremes of his instrument. Based in Philadelphia, Dan leads a variety of groups, such as the Dan Blacksberg Trio and Electric Simcha, and co-leads groups such as Archer Spade, the New York/Philadelphia avant-jazz quartet Bird Fly Yellow, and the terror-improv group Psychotic Quartet. In addition, Dan has also performed with Joe Morris, Joe Maneri, Danilo Perez, Gene Coleman, and is a founding member of Anthony Braxton’s Tri-Centric Orchestra. Dan is also one of the few musicians in the world who performs and teaches traditional klezmer on the trombone. He is a founding member of Alan Bern’s The Other Europeans, and co-leads the klezmer power trio Leviticus with Michael Winograd and Tyshawn Sorey. He has also played with many of the field’s top artists such as Frank London, Adrienne Cooper, Michael Winograd, Daniel Kahn, Michael Alpert, Hankus Netsky, Alicia Svigals, Alex Kontorovitch, Aaron Alexander, and the Shirim Klezmer Orchestra. He has taught at Klezmer Festival Fürth and Yiddish Summer Weimar in Germany, and has been an artist-in-residence at the University of Virginia in Charlottesville. He continues to be a regular faculty member at Klezkamp and Klezkanada.

Kevin Shea
Kevin Shea is an innovative and free-minded drummer, Kevin Shea has always imbued his playing with a humor and flexibility that few in the jazz world have been able to match. While perhaps best known for his work with the band Mostly Other People Do The Killing, Shea has played on a host of other projects in the Avant-Garde, Jazz, and other genres, including works by Rhys Chatham, People (with Mary Halvorson), Peter Evans Quartet, Alan Wilkinson, Talibam!, and storm&stress.

"An object lesson in how free improvised music should sound when played with authenticity and sincerity."
— The Wire

"Their musicianship and group energy jumps through the speakers, delivered on six pieces that serve as terrifying, accurate strikes against the boundaries of noise and jazz."
—Decoder

Recorded and Mixed by: Jason LaFarge at Seizures Palace
Mastered by: James Plotkin