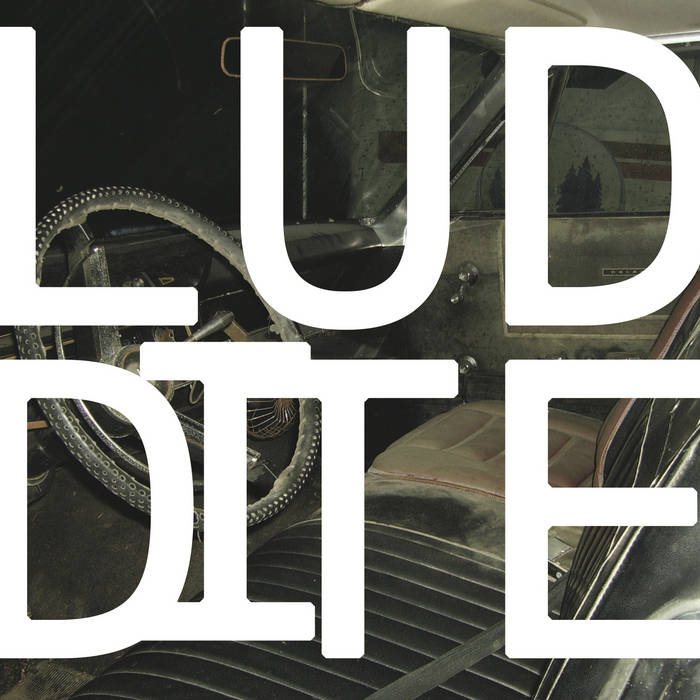 Luddite is the second document from Dunmall's 2012 visit to New York City for the Vision Festival, following Chamaeleon (New Atlantis, 2013) by the Edward Ricart Quartet + Paul Dunmall, comprised of Dunmall and Barker with guitarist Ed Ricart, bassist Jason Ajemian, and the great trumpeter Herb Robertson. Luddite was recorded the day after Chamaeleon, and represents one of many unreleased archival recordings tracked by Barker in his Williamsburg studio. Heralded as "the savagely sharp drummer" by Time Out NY, Barker is best known for his power and versatility, and his connection here with fellow Brooklynite Tim Dahl and master improviser Paul Dunmall is in heavy exhibition throughout.

From the outset, Barker's tom-heavy rolls unfurl relentlessly, augmented by the seemingly-octapedal dynamism of his hi-hat, snare, cymbals, and the round, cavernous punctuations of his kick drum. Dunmall is a singular figure in the world of improvised music, who manages to continually ratchet the intensity of the music without compromising his devotion to melodic continuity. Like Barker, Dunmall has built a new lexicon of expression on his instrument, informed by improvisors from the US and across the pond, while retaining a strong foundation in the tradition and history of the music. Here, atonality and arcing melodicism are employed to masterful effect. Even at its most free, the music swings, throbs, and breathes. The deep well of energy on display is a function of the natural prowesses of the musicians, and the result is devoid of the contrivances, cliches, and posturing that is all-too-common to energetic improvised music.

Luddite is a fine document of some of the finest improvisors on the scene, firing on all cylinders. Records like this gracefully accommodate the rich history of the music, while setting the bar at an unattainably high level for most mortals. Grab your copy and tell your friends.

Paul Dunmall has been a leader in the international improvised music scene for decades. His work has been extensively documented via his own DUNS LTD. imprint, and via influential labels like Cuneiform, SLAM Productions, and many more. His work for FMR Records culminated in a massive 50 CD boxed set released last year. He has worked in countless configurations, with many of the finest improvisors in the world, including the cooperative quartet, Mujician, alongside one-time King Crimson pianist Keith Tippett, bassist Paul Rogers, and the late drummer Tony Levin. His collaborators have included John Butcher, Elton Dean, William Parker, Barry Guy, Hamid Drake, Lol Coxhill, Mark Sanders, Chris Corsano, and countless others, including an Octet that operates under his own leadership.


Recognized by the New York Times as "deliriously creative," Barker harnesses his masterful technique and beautifully tuned drums to execute a boundless stream of rhythmic extrapolation from behind the kit. Since relocating to New York City from Atlanta at the behest of the legendary bassist, Sirone, Barker has appeared on recordings with Sonny Simmons, Daniel Carter, Sabir Mateen, Rob Brown, Matt Shipp, Ken Vandermark, Tara Jane O'Neal, William Parker and Virginia Genta. He is also a founding member of Gold Sparkle Band, Acid Birds, and Barker Trio, alongside saxophonist Michael Foster and bassist James Ilgenfritz.