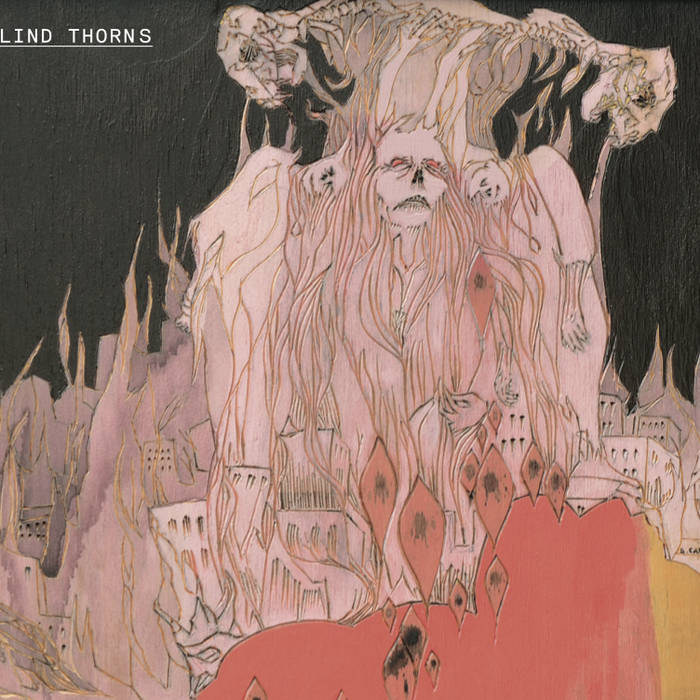 Blind Thorns is brimming with images that seem to manifest just before reality is peeled back, and the sound of warped tape and backwards incantations cross fade into an echoic (torture?) chamber. Amorphous, telepathic, controlled communication between the instruments makes for dark, impressionistic and textural listening that is unafraid to show its backbone- this record explodes, rocks the fuck out, burns and sings- and thankfully, it does not take itself too seriously.

It is crystal clear from the outset that influences run deep and wide, and that these musicians have achieved a level of mastery and versatility on their respective instruments. Tribal rhythms, white noise, throat singing, and transcendental melodies are subverted by disheveled sonic debris. Starkness gives way to maximalism, as menacing noise gives way to shining consonance. This is the soundtrack for waking up to the fact that this universe is a simulation, and there is no escape…

The band formed in the Fall of 2011, as a guitar and vocals duo. Guitarist Shane Perlowin, from Asheville, NC, and vocalist Antoine Läng, from Geneva, Switzerland, booked a seven-date tour together in Switzerland, without having previously met in the flesh. Their musical and personal chemistry was a match, and their tour marked the start of a trans-Atlantic collaboration that has blossomed ever since. At the end of their first duo tour, Perlowin and Läng holed up in a studio in an underground bunker in the Gruyère countryside, and recorded the guitar and vocals for what would eventually become the Blind Thorns' debut album.

Several months later, after mixing the duo music, Perlowin invited longtime collaborator + AHLEUCHATISTAS drummer Ryan Oslance, to record drums on the album. In the Summer of 2012, after a few months of close listening, Oslance laid down his signature textural intensity, tying together the abstract conceptions of Perlowin and Lang with driving, tightly orchestrated rhythms. In March of 2013, Perlowin and Lang reconvened in a studio outside of Geneva and spent a few days mixing the trio recording. The finishing touch was bringing in the works of visual artist Sarah Cavalieri to create a complete aesthetic experience to suit the record- a universe of nightmare, hallucination, conjuring, color, and magic.