Burning in Water, Drowning in Flame 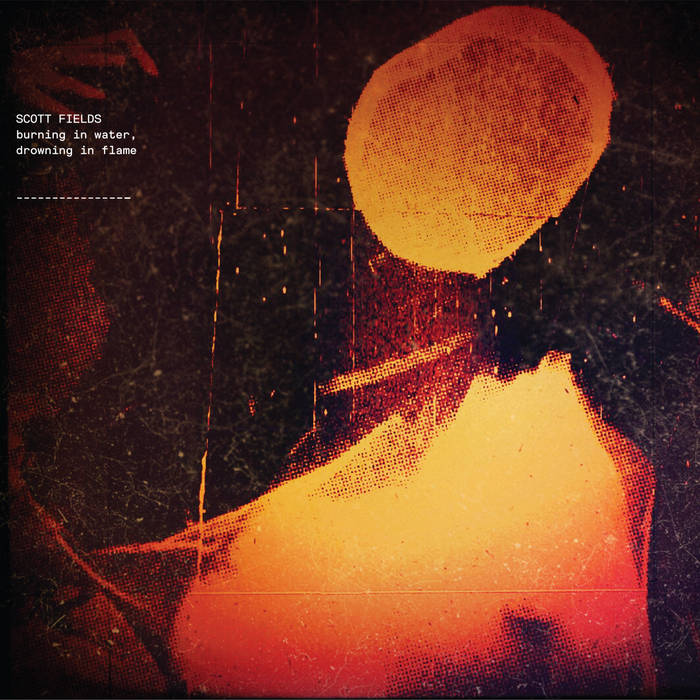 Burning in Water, Drowning in Flame is Scott Fields first “proper” solo CD. Although Drawings, from 2008, was also solo, it was more of an electric sound collage (for a multi-media installation at the Kunstmuseum Liechtenstein) than a pure musical excursion. Either way, BiWDiF is certainly Fields’ first acoustic solo CD. The compositions are based on nine Charles Bukowski poems. As with most of his music, here Fields mixes composed material and improvisation.

Fields’ performs on a flat-top, steel-string guitar using a, more-or-less, classical-guitar technique. Because steel strings are as hard as steel, they quickly wear down fingernails. That’s why most flattop guitarists play with plectrums, fingerpicks (which fit over each finger), or the fleshy pads of their fingers. But genetic good fortune and decades of clean living have left Fields with unusually strong, talon-like fingernails that he keeps polished to a razor’s edge. This allows him to drawn a wide spectrum of colors from his Scott Fields model Ark New Era guitar.

The first five tracks, a suite called “burning in water,” are in a tuning that is common in folk and classical guitar music. The highest five strings are tuned as usual and the 6th string is lowed a whole stop to D.

Fields began writing and recording these solo pieces at the beginning of 2011, stopping by the studio every few weeks to record the latest composition. In the studio he meticulously followed the score, stopping and restarting to correct mistakes. Eventually he became dissatisfied with the results. “They were constipated and unmusical,” Fields says. He told the engineer to erase the tracks and he dropped the project.

In early 2015, however, New Atlantis asked Fields to record a CD of duets for electric guitar and drums. Fields wrote the material, found a drummer, scheduled a warm-up gig and recording session. Two days before the gig and a week before the recording the drummer backed out of the project. “He turned out to be a neurotic, crybaby, prima donna,” Fields says. “Never hire a musician who thinks he’s doing you a favor.” New Atlantis top dog Edward Ricart suggested that Fields just record without a drummer. That motivated Fields to revive these solo compositions.

This time Fields recorded each piece in complete single takes. He instructed the engineer to keep the recording machines running until Fields said he was ready for a coffee break. To increase his sense of isolation he worked in a darkened studio, his back to the engineer and any activity in the control room, a single floor lamp focused on his music stand. The resulting introspective tracks flow naturally.

As with many of his compositions, the tracks on BiWDiF are text-based. Fields uses speech patterns to set rhythms and contours that otherwise wouldn’t occur to him. His scores include the words and are in effect songs that could be sung by an adventurous singer

He used this technique first on Mamet (Delmark), which was settings of excerpts from five David Mamet plays. Beckett (Clean Feed) and Samuel (New World) are settings of, surprisingly, Samuel Beckett plays. He has set dozens of Bukowski poems, two of which appear on everything is in the instructions (Ayler) and one each for Kintsugi and Mostly Stick (both on Between the Lines). The first track of Kintsugi is also a Mamet play fragment, a rearrangement of a leftover from the Mamet CD.

Burning in Water, Drowning in Flame was the first book of Bukowski poems that Fields acquired. But none of the compositions on BiWDiF are from that book; they are from the collection The Pleasures of the Damned.